Despite their obvious differences, fly fishing and skiing have much in common. The seemingly effortless stroke of a master caster is mirrored in the smooth, efficient arc of an advanced skier linking turns on a snowy slope. You can tell much about the practitioner’s ability by observing curvatures. A good cast involves a tight loop with no extraneous angles. The tracks of an elegant turn on a groomed ski slope form a correspondingly consistent arc, appearing as a railroad track bent by an ogre intent on making a C.

Some other, subtler similarities exist between the two. They both involve water, one in its liquid form, and the other as a solid. Fishing and skiing are immensely enjoyable activities for novice participants; yet they allow a nearly infinite level of perfection for those in search of mastery. But the best part is that while one is most closely associated with summer, and the other with the season of snow, there are a host of locations where it’s feasible to enjoy both in a single day.

Here are just a few first-class, family-friendly destinations where you can mix carving turns and shredding powder with a little wintertime trout fishing. 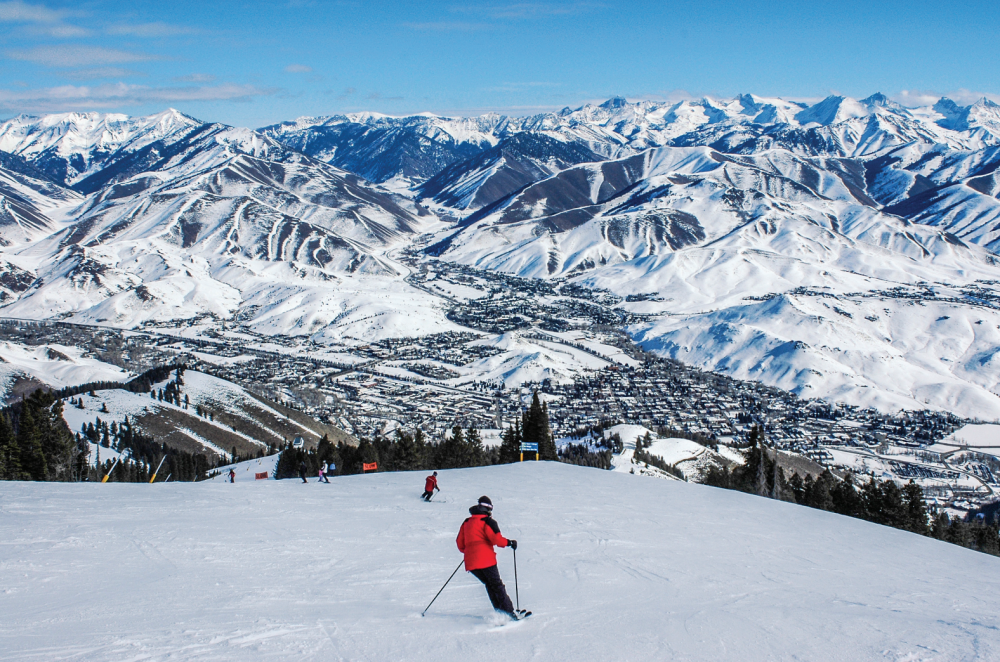 To reach the snowy peaks of Idaho’s famed Sun Valley Resort, first you must cross the Big Wood River—one of several terrific winter fisheries within reach of Ketchum, and home to robust populations of rainbow and brown trout. Equally revered for its downhill terrain farther to the northeast, Big Sky Resort boasts more skiable terrain than anywhere in the country, and when you need a break from the powder, you can wet a line on the Gallatin River.

The history of the Sun Valley ski resort dates to the 1930s, when railroad magnate Averill Harriman sent a scout to find the best destination in the United States for a ski lodge akin to those found in Europe. In the Idaho drainage of the Big Wood River, the quest of Harriman’s emissary came to an end. It also ushered in a new era in skiing. Rejecting the notion of seeing his guest dragged up a mountain by a tow rope, Harriman ordered his railroad engineers devise a chairlift, the first of its kind in the world.

Today, Sun Valley Resort is known for its impeccably groomed slopes, stunning scenery, and the understated elegance of its ski lodges and accommodations. The hoary crown of Baldy Mountain rises 9,150 feet above sea level. High-speed lifts and a gondola extend from the valley to various points along the flanks of the mountain and its summit. To reach these, skiers must tramp across a wooden bridge spanning either the Big Wood River or Warm Springs Creek, one of its many tributaries.

“The latter part of February and early March are great weeks to ski in the morning and fish in the afternoon,” notes Todd Van Bramer, guide coordinator for Silver Creek Outfitters in Ketchum. “In fact, the warmest part of the day is always when you want to be on the river in the winter. We get some really strong dry fly fishing at times. The Big Wood River is literally right out the front door of one of the ski lodges.”

Skiing and fishing are in closer proximity at Sun Valley than anywhere else in the country. I have seen an angler hook up on rainbows in the Big Wood River just in front of the River Run Lodge. There are several public accesses on the Big Wood within 30 minutes of the resort, and while there are healthy numbers of brown trout in the river, anglers will find mostly rainbow trout. Additionally, if you want a greater challenge, Silver Creek and the Big Lost drainages are not far away. 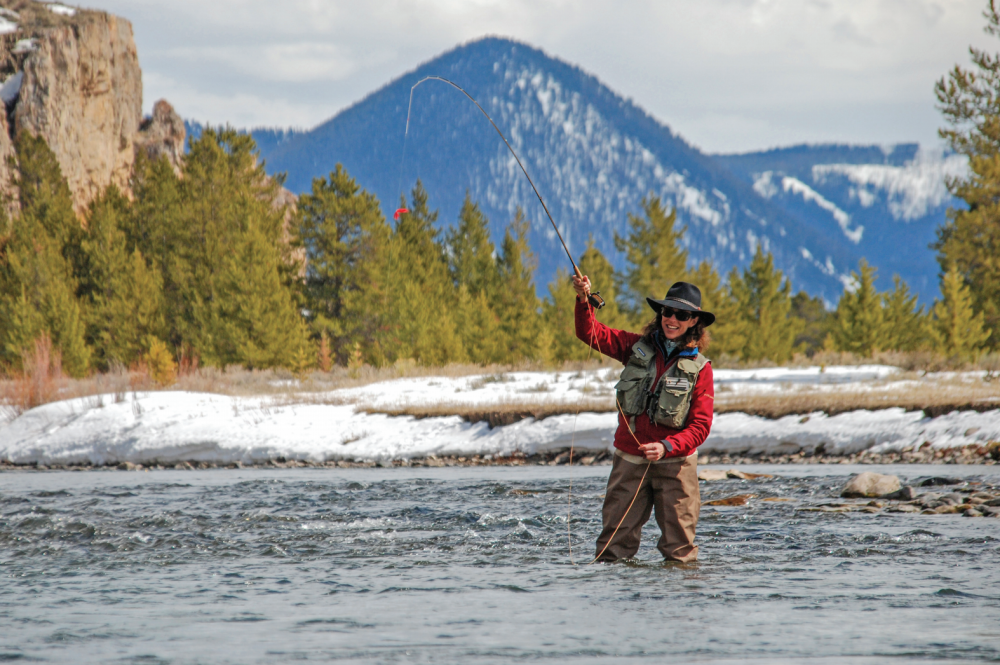 California’s Sierra Nevada boasts some of the highest average annual snowfalls in the nation. From the summit of Squaw Valley resort, skiers enjoy stunning views of Lake Tahoe while floating atop a snowpack that often exceeds 400 inches. The resort will host a women’s World Cup race March 9–12, 2017, which is a testament to the area’s esteem in the international skiing community. Skiers wishing to rub shoulders with an Olympian just might do so at Squaw Valley. A number of world-renowned athletes call the resort home. What’s more, purchase a lift ticket at Squaw Valley, and it’s good for skiing its sister resort, Alpine Meadows, which is just a short 15 minutes away.

You can access the resort from state highway 89, which coincidentally parallels the Truckee River from the outlet of Lake Tahoe to the town of Truckee. From there, the Truckee River flows eastward before darting into Nevada, 20 miles away. The river holds robust populations of rainbow and brown trout. Specimens of both species can be “yuge.” There’s sufficient public access for do-it-yourself fishing on the Truckee, but its trout have something of a “here today, gone tomorrow” reputation, making a guided excursion well worth the money. Along with the Truckee, winter trout teasers may find memorable fishing on the Little Truckee, a modest tailwater with larger-than-average trout—a waterway many anglers often compare to a spring creek.

Winter fly fishing tactics don’t revolve around snow so much as they do around the cold—cold water, that is. Successful anglers adapt themselves to the feeding and holding patterns of lethargic fish. Here are a few tips that will put you ahead of the game.

Think Slow / Trout generally favor the slow water found in deep holes and lazy runs in winter. They don’t have the energy to buck heavy current or hold in a riffle while waiting for food.

Work It, Baby / Trout usually won’t move far to take a fly. Methodically cover likely habitat with casts that put your offering in every inch of every feeding lane.

Live for Lunchtime / There’s no need to hit the water early. Go skiing instead. The best winter fishing consistently occurs during the warmest period of the day, from late morning to midafternoon.

Master Minutiae / Midges are a staple winter food source for trout on most western streams. Small midge imitations are the go-to flies for guides and an excellent starting point on most waters.

Blue Moon Dry Flies / Nymphing is the bread and butter of coldwater fly fishing, but you can experience some dry fly fishing in the dead winter, usually with size 18 to 22 bluewinged olive or midge patterns.

Pamper Yourself / Wear layers of clothing over a thermal base layer to keep your core warm, protect your toes with disposable warming packets in your waders, and keep circulation in your fingers with hand warmers and good gloves, especially after dunking your digits to release a big brown.

Big Sky Resort boasts, “the biggest skiing in America.” With 5,800 skiable acres and 4,350 vertical feet, it has the largest snowy footprint of any resort in the country. Drop into the chutes from Lone Peak if you’re daring, or cruise the flowing groomed runs descending toward the Huntley Lodge. Big Sky is on the bucket list of skiers worldwide, but don’t expect to fill the pail in one trip. Three hundred named runs on four connected mountains will keep the heartiest skiers busy for a week, or a lifetime.

From the summit of Lone Peak, a nearly indiscernible ribbon of water gushes in a serpentine course from Yellowstone Park into Gallatin Canyon. The Gallatin River is one of three Montana tributaries to the Missouri named by Lewis and Clark. While most winter trout destinations are tailwaters, the Gallatin is a free-flowing old girl from its headwaters to its confluence with the Missouri River at Three Forks. It is an occasionally fickle, but surprisingly good winter trout fishery with brown, rainbow and cutthroats found in various segments of the river. Native mountain whitefish, some attaining impressive sizes, jostle with the trout in the Gallatin. Public access is abundant and in many cases, clearly marked from the road, but if you’re a newcomer, or time is a factor, you’re likely best served by seeking the knowledge of a guide to learn the water.

“The Gallatin is the real deal in terms of a wild, winter trout stream,” characterizes Brian Kimmel, a longtime guide. “At least nine miles stays open in the winter. The fishing picks up in midFebruary and gets better through the end of March.”

“The canyon walls, the evergreen trees and the mountains make the scenery unbeatable. We see lots of wildlife as well, like bighorn sheep, elk, and moose. This is just a really cool place to be in the winter, even if we didn’t have some of the best skiing in the country.”