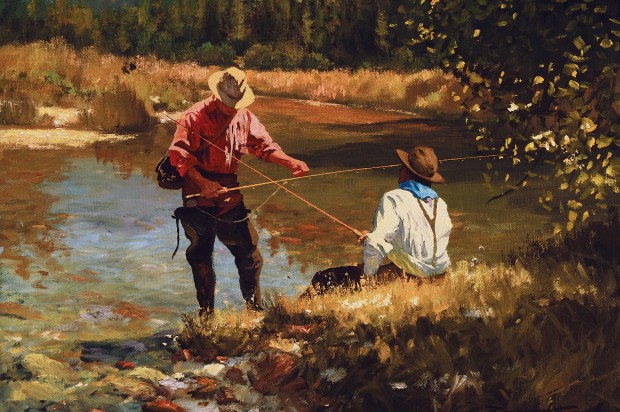 The Best Trip of the Year

Measuring the quality of an experience by the people you share it with.

FRIDAY IS JULY FOURTH, how about us going up into the mountains and fly fishing for native brookies?” I ask Elaine. “I bet we won’t see anyone.”

As has been typical of our 36 years of marriage, Elaine enthusiastically agrees to my suggestion because she always wants to please.

“I have travelled a good deal in Concord,” wrote Thoreau in Walden, and I contemplate the paradoxical nature of that statement—it relates to both the classic 19th-century book and my angling life as Elaine drives us toward the highland rill. The first bridge we cross traverses the James River in Botetourt County, Virginia. It was also the first place I drove to after I earned my driver’s license.

On that May day in 1970, I took Lee, a high school friend who debated fishing tactics with me the entire way. Lee forcefully expressed the opinion that his night crawlers would outperform the new lure (a 3½ inch purple Rebel Minnow) I’d purchased for the excursion—that the smallmouths, rock bass, and redbreast sunfish dwelling in the river would eagerly bite his worms and ignore something so ridiculously fake and unnatural as a hard plastic minnow.

In a matter of speaking, Lee did outfish me that day, catching and keeping a dozen or so small bass and sunfish and attaching them all to a stringer. My fishing records show I caught only one fish that day, but it was the biggest fish of the trip for both of us and my first ever “keeper” smallmouth, an honest 12-inch fish I released. All the way home, Lee gloried in his success and chastised me for the folly of releasing such a huge fish. So began my slow metamorphosis as an angler.

A few years later, on opening day of trout season, some friends and I visited the stocked stream, Jennings Creek, which flows into the James not far above the aforementioned bridge. Typical representatives of the term “young men” (the three of us certainly viewed our 20 callow years as qualifying us for manhood), we possessed equal amounts of idealism, enthusiasm, unfounded cockiness, and rank incompetence in the realms of fishing, women, and worldly affairs, though we didn’t admit to the possibility of harboring flaws in any of those areas.

We rose at 4 a.m. and were on the road a half hour later. On the way, our conversation mostly revolved around the question of whether silver or gold Mepps Aglia spinners would entice the most rainbows. I strongly advocated for silver, whereas my chums argued for gold. The other major debate concerned who would be the first to haul in a six-trout limit. Each of us was utterly convinced of his ultimate victory in this no small matter and loudly espoused his should-be-obvious-to-all angling prowess. Around 5:15, we finally arrived at the Blue Hole, the deepest pool on Jennings Creek and historically the site where hatchery trucks dumped massive numbers of rainbows.

Legally, folks couldn’t start fishing until 9 a.m., but we felt compelled to claim the “best spots” before the hordes arrived at what was then, and is likely still now, the premier locale on Jennings Creek for catching recently released rainbows.

But when we arrived, other young men were already perched on rocks—the best ones, in fact—ringing the hole. The three of us chastised ourselves for not arising earlier. At 7:30 a.m., the fishermen (including myself) who had hitherto been sitting on rocks now waded into the pool. The icy water seeped into my leaky waders. At 8:30, a large number of older men arrived at the Blue Hole, elbowed their way into the pool, and began baiting their hooks, largely with salmon eggs or bits of worm. I silently raged at the audacity of old men.

At 8:45, one of the old-timers announced that his watch read 9 a.m. and hurled his garden hackle into the pool. The assembled multitude launched curses at this chicanery, but when the offender derricked in a rainbow, everyone present also began casting.

I don’t remember much about the next two-plus hours except that they were characterized mostly by tangled lines, frigid feet that had lost all feeling, and none of my trio’s catching any trout, although all the fishermen around us seemed to be experiencing success.