On countless Rocky Mountain waterways, the first hatches of big bugs signal the start of another season, and for anglers who know how to imitate them, the chance for some of the best dry fly fishing of the year.

Spring is a much-heralded time for trout anglers across the Western United States. Winter loses its grip, the days grow longer, weather patterns generally stabilize, and fishing becomes a lot more comfortable. Accompanying the warming air and water temperatures is the appearance of more aquatic invertebrates. Steady hatches of chironomids join heavy numbers of blue-winged olives. Rivers start to experience their first thick emergence of caddis, and on some streams, March browns show up for the first time. All that activity gets the blood flowing. But for many fly fishers in the West, that feeling of true excitement hits with hatches of the first large bug of the year—Skwalas.

Skwalas give fly fishers the first opportunity of the new season to break out their boxes of stoneflies and large attractors, and cast easy-to-see surface patterns to rising trout. Sure, Skwala events don’t match the popularity of salmonflies, golden stones, or green drakes that will arrive on the scene later in the year. But for some anglers, they are a focal point, and I know a couple of fly rodders who go out of their way to chase Skwala emergences from stream to stream over a six-week period between mid-March and early May. To help you imitate these early-season monsters and make the most of your prerunoff time on the water, here are a few considerations and tactics that have worked time and time again, year after year. 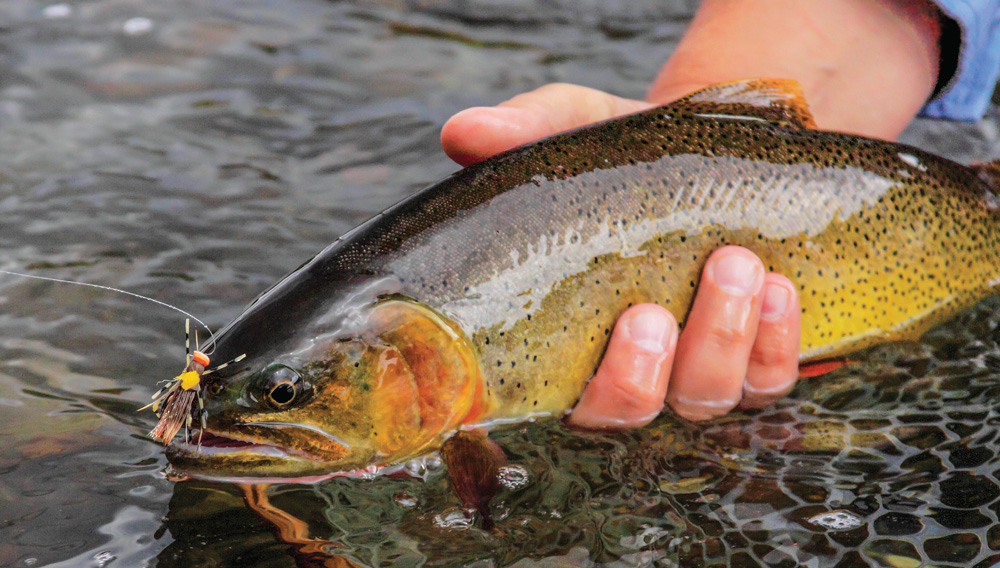 Skwalas are members of the Perlodidae family. There are three prominent species in western North America—americana, curvata, and compacta—however, there are only slight physical differences among the trio, and it takes a close inspection to detect variations. Moreover, any angler could easily misidentify any of the nymphs as a golden stonefly. In adults, the most noticeable traits shared by all is a smoky-colored body (similar to a mahogany dun), a thick, dull orange stripe on top of the head, and black notches on the ventral side of the thorax. While Skwalas are the first large stoneflies to appear on many waters, they are noticeably smaller than salmonflies and golden stones. Adults typically measure 18 to 22 millimeters long, though larger specimens can approach 25 millimeters, most often matched with hook sizes 8 and 10.

Like most spring hatches, Skwala emergences occur as water temperatures warm. There are differences from stream to stream, but for the most part, hatches begin to hit their stride when water temperatures average between 46 and 49 degrees F. The Skwala emergence and life cycle is similar to those of most other stoneflies. Nymphs crawl from the streambed to surface rocks and vegetation—on dry land, their exoskeleton splits open, and the adults crawl out of the shuck. After mating, females return to the surface of the water to release eggs. Some bugs do this while flying, but just as many crawl from the bank to the current. They can be on the water for quite some time. I have observed some adults drift for several yards or more without leaving the surface. During this time of their life cycle, they are most available to trout.

The Skwala is a prototypical “clean water” bug that favors rivers with moderate-to-high gradients and ample cobblestone, which are common on tailwaters but most prevalent on freestone or freestonelike rivers. The pre-runoff window—that time frame from when water temperatures warm consistently above 40 degrees until snowmelt and runoff begins in earnest—typically lasts between four and six weeks on most freestone streams. This window coincides with a trout’s elevated metabolism as winter’s grip fades. At this time of year, trout need to eat more to meet the higher caloric requirements needed to survive another season (or the rituals of spring spawning). Skwalas are the largest food form emerging at this time of year (a boon to fly anglers) and while nymph patterns can hammer fish, the surface is really where you’ll want to focus your efforts—not because it’s always the most productive tactic, but because it’s the most fun. 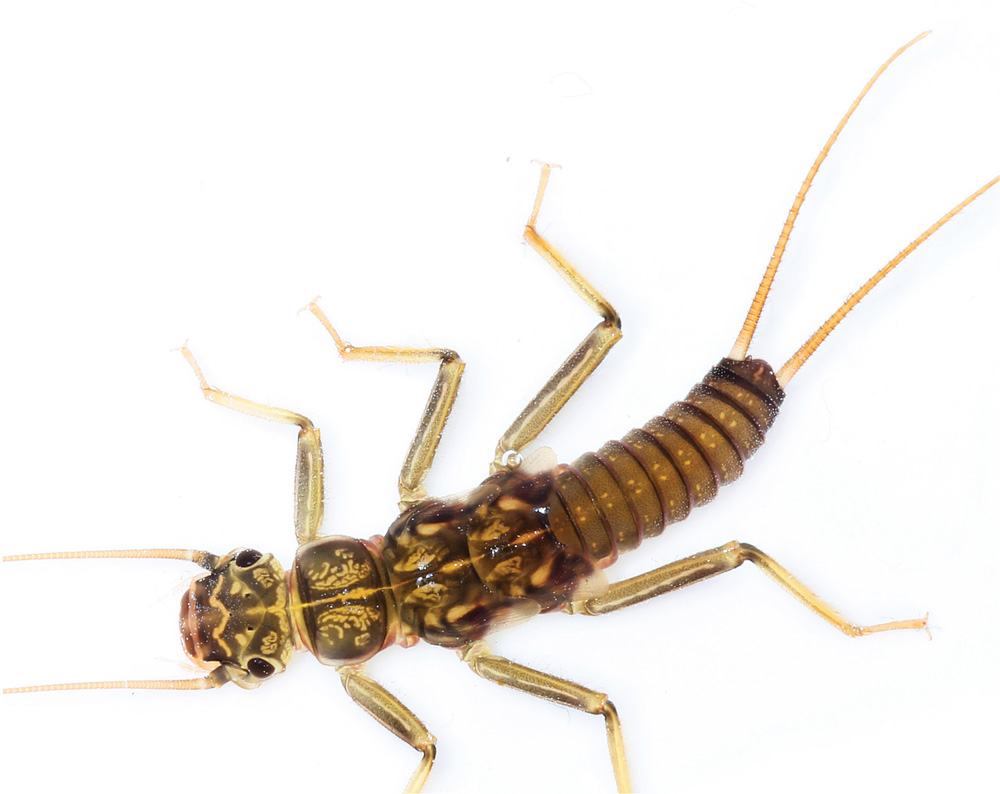 Skwala water abounds in the Western United States, but each stream is different. Montana’s Bitterroot River has one of the earliest emergences in the Rockies. It typically kicks into gear in late March or early April, but has started as early as late February. A few years ago, I was lucky enough to hit the hatch on March 14 between the towns of Florence and Lolo. Someone advised me the hatch typically moves upstream at a consistent four to five miles a day under the right conditions, so had I fished the same section a couple weeks later, I may have missed the hatch altogether.

On the other hand, the Skwala hatch on Oregon’s Owyhee River has the reputation of being sporadic. But when it is on, it is really on. The height of hatch activity can be as early as mid-March during some years, though it generally reaches its peak in April. Another northwestern river, the Yakima in Central Washington, hosts a Skwala hatch that generally starts in early March and extends into April—Yakima fly fishing veterans say the bug’s upstream progression can be molasses-slow. Although officially a tailwater, a number of tributaries feed the Yak, which can limit dry fly possibilities just before runoff. It is still very much worthwhile to go subsurface with larva imitations. 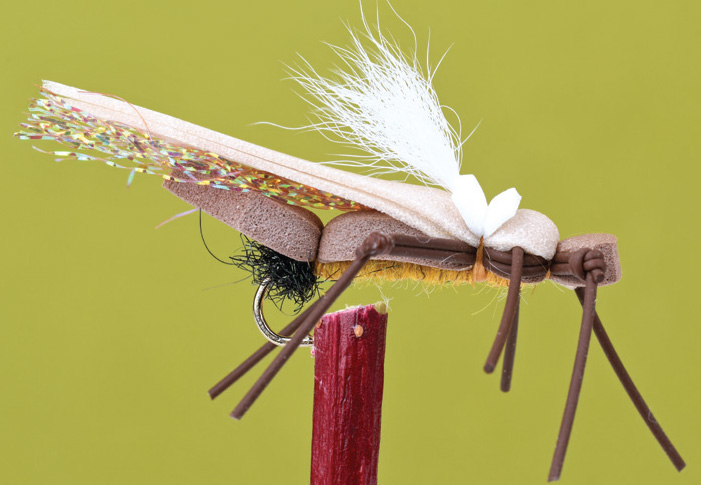 Wyoming’s Snake River is my home turf and the waterway where I have the most familiarity with Skwalas. Like the rivers mentioned above, local anglers pay close attention to what is happening with runoff and weather to nail the best window for when the hatch may take place, and many of my clients try to time a spring fishing trip to coincide with the bugs’ emergence. Rightfully so—the hatch on the Snake is intense and generally the last to appear in the West. It typically starts in mid-April and lasts into the middle of May. But the peak tends to occur with the first signs of runoff. It’s not uncommon for Snake anglers to enjoy a solid week of the hatch before watching the river turn to mud. But there are also those lucky years when the runoff arrives late, and there’s excellent fishing with large surface patterns for three weeks straight.

That said, remember that on many freestone streams, Skwala emergences don’t end just because runoff starts. Most western freestones go through several 24-hour melt/freeze cycles before runoff hits in full force, and while a stream might be off-color in the morning, it may clear slightly around noon, and offer better fishing in the afternoon hours. It may take several days before the high-elevation temperatures are high enough to break the cycle. Even if a river is off-color, fish on. Remember, you’re imitating big bugs that are easy for trout to see and are already keyed in on. Keep on fishing Skwala imitations until runoff reduces water visibility to a couple of feet.

Skwala nymphs prefer a rocky substrate and well-oxygenated water, as found around a riffle. Because trout follow bugs migrating toward dry land, target fish along fast-water seams with both dry and nymph patterns. (Boots Allen)