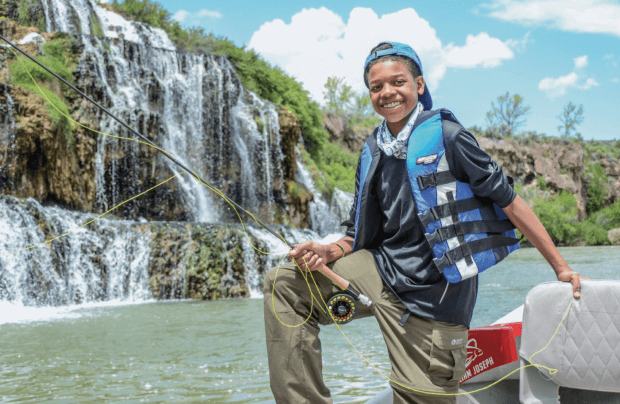 Salvation on the Snake

Our guide, Chase Hines, maneuvers his drift boat off the chocolate-colored river and into a small spring-fed side channel for a restroom break, and to change out our Stonefly Turds for brighter San Juan Worms. Most years, the entire river is as transparent as the spring channel, with vegetation highlights strewn along its bottom. My young fishing partner for the day, Levi, returns to the vessel with a handful of plants. He throws them at me and says, “I found some mint and parsley while I was out there.”

Levi smiles, tight lipped, and squints in a self-satisfied way. He can tell I’m surprised he has an appreciation for wild herbs. For most of the day, I listened to him chest-thump about how many fish he caught the day before, how much weight he could lift, how many girls liked him, and how he never (ever) gets sunburned. Much as the bizarre 20,000 cfs flow of the Snake River that day obscured the thriving, underwater ecosystem and 5,000 fish per mile, the veneer of braggadocio often belies the vulnerability, insight, and longing for connection shared by the teens at On River Time’s yearly Fish On camp rendezvous.

This year’s campers are similar to those I’ve met previous years—kind-hearted people from difficult family environments who struggle to overcome traumatic memories. Over the course of the event, we see only snapshots of their coping mechanisms. In a casual conversation, Levi mentions he was held back for a couple of grades, and he just might be the only middle-schooler I’ve met who would be eligible for a driving learner’s permit. He recently changed schools, presumably when he moved away from his biological family to a boy’s ranch in Springville, Alabama.

Did somebody neglect him? Was he homeless? Could he be a sexual-abuse victim? Was he taking care of younger siblings so they didn’t go hungry? Did he watch his family devolve into criminal drug addicts? Or did his parents die and leave him all alone in the world with no one willing to take him in? I just don’t know.

What I do know is Levi and I caught more fish than any of the other eight On River Time drift boats on the water—five rainbows and five cutthroat. Still, I was worried I’d disappointed him, as all day we were fixated on besting his previous day’s total of 11 trout. That thought faded two evenings later at the camp finale “pinning ceremony,” where each camper recognizes someone who made them feel special during their week in Idaho, and asks that person to fasten a pin to them. Levi confidently strode in my direction and stated in a solemn, matter-of-fact voice how much fun he had catching fish, laughing, and getting to know me on the river. He appreciated that we both remained upbeat, which may be one reason we caught the most fish. Then he smiled, made direct eye contact, and hugged me for several seconds.

A Sense of Place

On River Time is a nonprofit that provides year-round mentoring to abused and neglected teens living in group homes. The anchor activity for the organization is a weeklong fly fishing camp on the Snake River. For the kids they serve, nothing could be more extraordinary. The group covers all the airfare, lodging, flies, apparel, gear, meals, and other expenses, and for six days and nights, campers are in almost perpetual motion from all the activities. But if you watch closely, you’ll see changes happening beneath the surface.

Founder Steve Davis knows firsthand that a smile and memorable day on the water may not coincide with inner peace when it comes to surviving abuse. He was over 35 years old before he came to terms with his own mistreatment. Despite graduating college, having kids, and a terrific job as senior vice president of an insurance brokerage company, he felt a secret shame. He credits therapy and fly fishing in equal parts for helping him find amity—in particular, fly fishing on the South Fork of the Snake River during its famed salmonfly hatch.

Davis founded On River Time in 2012 in Birmingham, Alabama, with the notion that he could help abused kids begin living unbounded lives sooner rather than later—replete with vivid, positive memories and peaceful moments to counterbalance the intense negative retentions. So far, his vision changed the lives of over 60 kids.

Davis framed the Fish On camp as a reward for kids deemed mature enough to make the journey by their guardians and ranch directors, and the On River Time director and staff have a chance to meet and inform participants on the activities and expectations before the yearly June departure. Most kids they meet are shy and communicate in short, stiff, polite but detached sentences, coupled with shoulder shrugs and a lack of eye contact. By the end of camp, they speak as individuals, with more intonation and a sense of humor, and proactively ask questions and express opinions.

Those lucky enough to fly fish the hallowed waters west of the Mississippi may have come to terms with the snowcapped mountains, alpine vegetation, wildlife, and crisp weather, but On River Time kids are enamored with such foreign surroundings. Many of the kids have never traveled outside their home state or flown on a plane. A Snake River adventure offers a complete break from their lives at home, and we encourage everyone to look around, take note, remember all the visual stimuli that come with such a camp experience, and revisit it in their memory anytime.

Out of the gate, my partner on the river was Reggie, and I worried he’d have a tough shell to crack. I could barely get him to mumble a few words as we prepped for the day with our guide. For the first half of the day, the trout eluded us, but Reggie didn’t seem disappointed. Everything caught his eye. First it was the seagulls, then the ducks and eagles, and finally, he homed-in on one of the Snake’s iconic landmarks—a massive waterfall, probably 50 feet high. I thought he was excited when he caught a whitefish, but enamored with the roaring sound of water, he grinned and pointed, “Ooh, let me climb it!” After he reached a point the two of us remaining in the boat deemed “terrifying enough,” he slowly descended down and rode the adrenaline the rest of the day.

On dry land, On River Time director Jeana Durst made a point to share Reggie’s story with the other campers. Reggie acted sheepish, but I caught glimpses of pride. After that day, he was different. When the group was eating a buffet-style breakfast the next morning, who should emerge from the kitchen wearing an apron? Reggie befriended the chef and talked his way into a role as a kitchen apprentice. The other campers confided they had never seen him so outgoing. Later, Reggie told me, “I’ve never been an outside person, but this trip made it seem like I should probably go outside a little bit more.”

Visiting the West is special, but fly fishing in drift boats on the Snake River is the cornerstone of the On River Time program—not just because it’s fun, but also because scientifically, it’s terrific medicine. Studies show combat veterans can reduce PTSD symptoms and cortisol levels for weeks after a fly fishing retreat. In follow-up interviews, some veterans say they enjoy fly fishing because it isn’t lazy or inactive, and the rhythmic movements and quiet moments in nature prevent otherwise intrusive thoughts and anxieties from taking hold.

Within 30 minutes of their arrival on the Snake, the kids receive a crash course in basic fly fishing terms and techniques. Splayed out in front of them are bags of gear, rods, and reels.

The guides walk them through it all and express their own individual approaches to the sport to help the campers build confidence. On the water, the guides continue mentoring, and a small instruction follows nearly every cast. It was all forthright, helpful, and honest. If someone said you were mending well, they weren’t lying.

One giggly camper with curly red hair and big green eyes later told me how she worked so hard, and listened to every instruction, and eventually coaxed a trout to eat—her first, ever. She was so excited in the moment, she dropped her rod and pulled in the fish by the line, hand over hand. “I guess it was a good hook set,” she erupted.

Nature often rewards skill and persistence. Other times, newbies just put a fly in the right place at the right time. Years ago, a silly young lady who referred to herself as “psycho Jamey” caught a 24- inch brown trout. So far, all our campers have caught fish, and many of those fish stretch well into double digits.

I laughed to myself at how fast the lodge’s casting pond became busy with kids perfecting their casts after day one on the water. By the second day, they were greedy, in a good way. The On River Time staff and myself jumped at the chance to stoke their competitive spirit and issued a fishing challenge between boats. The notion of competition in fly fishing likely sours some circles of anglers, but in this case, I think the end justifies the means.

Director Jeana Durst, founder Steve Davis, various board members and junior board members, and yours truly collaborate each year to make camp a personalgrowth experience, and as a camp group, we spend invaluable time discussing a core value of the program. The children lead the sessions, and the adults punctuate it all with activities. One of my favorites takes place on the perimeter of the fire ring. One by one, kids privately write their worries on slips of paper, before tossing them into the hot coals. Each slip carries something deep and personal, but you wouldn’t have to read one to know it. You can see it on their faces.

On River Time is not a gift. It’s a reward for those showing resilience and focus. As an incentive for campers to stay on the right path, we invite exemplary former campers to return as graduating seniors and “peer mentors.” Last year, a previous peer mentor named Leitha greeted us at the lodge for a third time—as an employee. Years ago, after one camp, spending a summer working in Idaho suddenly seemed like a reasonable thing to a girl who’d formerly never left a 30-mile radius of her home in Alabama.

I became a camp fixture in 2014, when I simply accompanied the group as a freelance reporter. I didn’t expect a close-knit family to draw me in. I’m not a therapist or an outdoorsman. I didn’t touch a fish until the following year, and as far as I know, I’m the only camper who wore a lap blanket to protect my legs from sunburn. Truth be told, I really didn’t have anything in common with anyone. But year after year, I receive graduation invitations and thank-you letters from campers recounting specific memories. But I didn’t “change them.” The experience changes everyone and bonds us together. Misery may love company, but not so much as visceral joy does.

Whatever your background, trials, or tribulations, On River Time encourages everyone to have the courage to value themselves, trust others, follow dreams, and keep hope for the future, no matter the challenges.

Greg Robinson is a freelance writer living in Birmingham, Alabama.