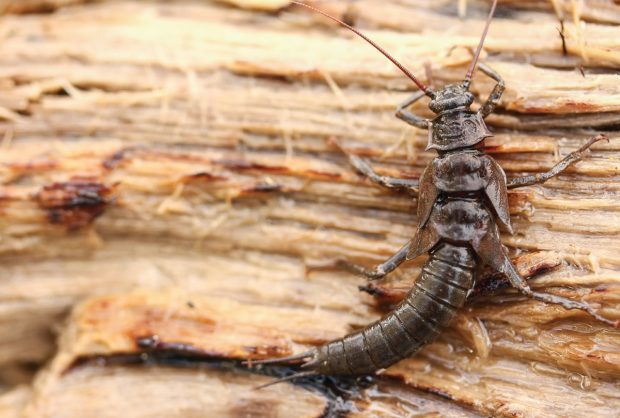 When, where, and how to imitate one of the meatiest aquatic insects in a trout stream.

Complacent is a pretty strong word, but it’s probably the best way to describe my recent folly on a Southwest Michigan trout stream. Having enjoyed more than my fair share of success on this particular water, I brought along my usual assortment of blue-winged olives and Hendricksons, which had always produced in the past. Trouble was, I had not fished this stream for a couple years, and had rarely fished it during late summer.

Needless to say, there were no hatching insects on that July afternoon, and the dry flies were a bust. I panicked and switched to streamers, which were equally ineffective. I finally settled down and remembered some old advice: Look under the rocks.

The answer was under the first stone. Three black stonefly nymphs clung there like miniature monsters from a sci-fi flick. I switched to a stonefly nymph, targeted riffles and pocket water rather than pools, and finally caught a few fish.

Stoneflies are an important part of a trout’s diet, and important to anglers as well. You may not notice them, because they spend a great deal of their lives tucked beneath streambed rocks and hatch on land, but understanding stoneflies will make you a better all-around angler.

While there are many species of stoneflies, they all share similar physical attributes, behaviors, and preferred habitats and occupy a well-defined niche in aquatic ecosystems. Moreover, they live in specific places along streambeds, can tolerate only an exact range of environmental conditions, and have distinct behaviors.

That’s a lot to take in, so let’s start with where stoneflies live. Stonefly nymphs live in swift, cold, clean water. Stoneflies are an excellent indicator species for the health of trout streams because, like trout, stoneflies cannot tolerate water that is warm, polluted, or carries a low oxygen content. The best place to find bugs is under rocks and gravel that are in the river’s current, especially in riffles where the natural churning effect of the water keeps it cool and full of oxygen.

The bugs will vary in size from less than 1/8 inch to over 1 inch long but are usually black, brown, or yellow in color. Their flat bodies and strong legs help them cling to underwater rocks, and they’re able to crawl along the bottom and among rocks with a distinct wiggling action. They do not swim, though they can become dislodged from rocks and drift downstream before finding another foothold.

Stoneflies go through a process called incomplete metamorphosis, meaning there is no wormlike larva stage or near-adult pupa stage in their life cycle as seen with other aquatic insects like caddis. It’s also worth noting that stoneflies do not have an emerger stage, as mayflies do, because they do not hatch in the water. Stonefly nymphs simply molt and grow larger underwater, spending up to three years on the streambed before finally crawling onto streamside rocks or vegetation to hatch. Adult stoneflies are short-lived, spending no more than a month in mature form before returning to the river after mating. Females lay their eggs on the stream surface, where many become exhausted and trapped, once again offering trout an easy shot at a meal.

Many stoneflies are active during the warmer months, but certain species become more active in late fall and winter. The so-called winter stoneflies in the Great Lakes region are perhaps the most important insects winter anglers can imitate. Because some stoneflies are active in the warmer months while others become more active during the winter, trout remain focused on stonefly nymphs throughout the year. This is an important consideration when selecting flies during the cold months, and conventional wisdom says you should be fishing midge patterns.

Try to match your nymphs to the basic size, color, and silhouette of the natural stoneflies in your area. Other factors to consider in nymph patterns are the prominent tails and antennae and wiggling legs that are defining characteristics of the natural insects.

Weight is another factor to consider when tying or purchasing stonefly nymphs. Remember, stoneflies crawl along the bottom, so you need to get your fly down among the natural insects to draw strikes. Bead heads, bead-chain eyes, and lead underbodies are good options for weighting your stonefly nymphs, so long as they are heavy enough to reach the bottom.

Realistic nymphs are great if you like, but I prefer nondescript flies like a Yarn Stonefly or Mallard Stone. They are simple to tie and easy to part with when I snag one on the bottom.