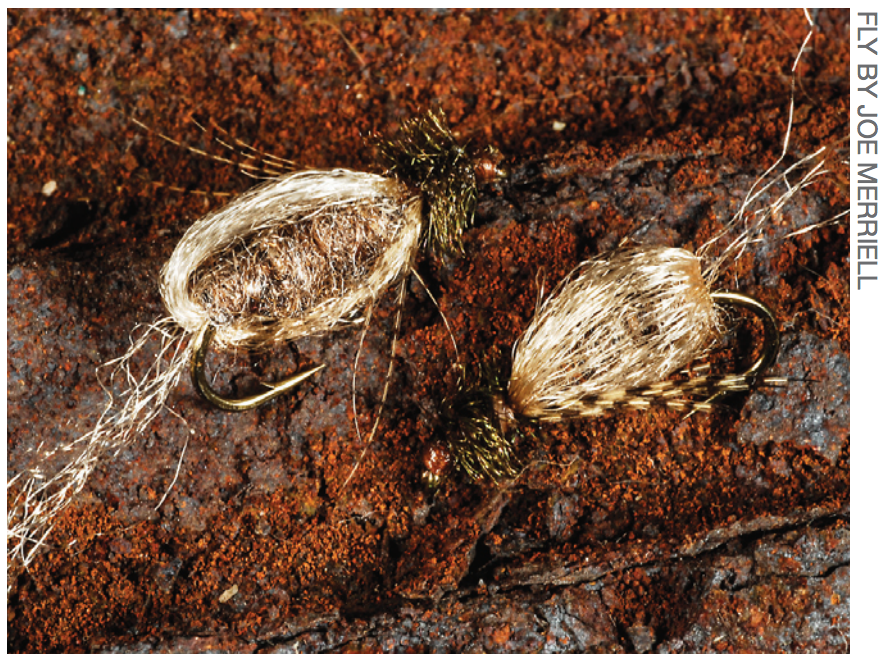 The final larval instar, even for free living caddis, builds a pupal case, crawls inside and begins the transformative process of pupation that eventually yields a winged insect. The process takes place four to six weeks prior to a bug’s emergence as an adult, so it’s the second important stage for anglers since the bugs are an important food source for trout.

At the end of pupation, the pupae tear through the case and briefly drift before swimming to the surface to emerge as a winged insect. Anglers often see the eruption of insects from the water’s surface, but the myriad of pupae darting underwater and bolting toward the surface largely goes unnoticed. Trout, on the other hand, feel that an insect underwater is worth two on the surface. It’s often easier for fish to capture a bug under the surface as pre-emergent pupa than when a bug is resting on the surface as an adult, waiting to take flight.

The bug’s exodus to the surface explains why wet flies and soft hackles are so effective during a caddis hatch; these types of flies accelerate and rise to the surface during the swing at the end of a drift just like the naturals. It takes a little discipline to fish “below” the hatch, but is often well worth the effort. If you’re not keen on swinging wet flies and soft hackles beneath a caddis hatch, try swinging a sparkle pupa or floating pattern like a Delektable Halo under the surface at the end of your dry-fly presentation; it can be a killer technique.

A caddis emergence is the most visual stage of the bug’s life cycle. From the bug’s perspective, it’s time to leave the water world and take flight, mate and lay eggs in the brief, remaining time they have left on Earth. From a trout’s perspective, it is time to eat. For the dry-fly aficionado, a caddis hatch is the stuff of dreams.

One of my first and most memorable flyfishing experiences was during a caddis hatch in Colorado. I’ve long since forgotten how many fish we caught that day, but I’ll never forget the spectacle of hordes of bugs emerging from the water. I’d never seen anything like it.

My friend Dan and I met our guide at 8:30 a.m. The late start and the guide’s leisurely pace flew in the face of all my bass-fishing experience when my father woke me before the crack of dawn. He told us to be patient as we stood in the parking lot rigging our rods; it would be worth it. He taught us to cast in a grassy meadow and study the water as we stood on the shore. Then he positioned us in a long riffle and almost on cue, the stream erupted with caddisflies and rising fish. I was in awe.

You can fish the adult caddis, the third and final stage of the bug’s life stages, with any number of classic Elk-hair Caddis variations. I like to tie mine with the hair head trimmed flat so it is more of a cone rather than an erect tuft. That way, at the end of a drift, it’s easier to tug the fly and submerge it, then let it rise to the surface on the swing like a pupa swimming.

I also like to use a Delektable CDC Elk Hair Caddis, but even oversized stimulators work well in some cases. The patterns are large enough to see amongst thousands of naturals and buoyant enough to suspend a dropper below to get a “two for the price of one” opportunity with each drift. Tie a LaFontaine Emergent Sparkle Pupa as a dropper from the bend in the dry-fly hook.

Fishing the adult stage is also one of the times when, contrary to most dry-fly fishing scenarios, movement is your friend. Caddis pupae are active creatures—swimming to the surface and struggling to break through the film. Adults are also moving as they lift off the water or even sometimes zip across the surface, leaving a micro-sized wake in their path. The whole stream is alive with movement.

Fertilized caddis eggs (1) attached to a streambed hatch in as little as three weeks. Larvae (2) emerge, feed, grow, and progress through several “instars” or larval stages before enclosing themselves in cases of rock, debris or tiny pebbles (3) and morph into pupae. Pupae shed the case and emerge as adults (4) to mate and lay fertilized eggs back into the stream so the process can begin again.

So if fish refuse your fly, add a little twitch. Don’t be afraid to wake it across the water, especially in the direction of the stream’s center back towards the shore. This is the common path of natural adults swimming to safety.

After mating, when caddisfly females return to the water to lay their eggs, trout have another chance to eat and anglers have another chance to catch trout by imitating egg-laying behavior. The female lays eggs after fertilization by a variety of means. Some dab their abdomen on the water’s surface, others dive through shallow water to attach egg sacks right to the streambed, while still others haphazardly broadcast eggs as they fly above the water. Whatever the bug’s preferred method, seeing egg-depositing caddis is enough incentive for me to switch to a caddis imitation—at least I know trout are seeing naturals, whether the bugs are the exclusive focus of the fish’s attention or not.

I once captured an egg-bearing caddis on the White River. She had a green egg sac on the tip of her abdomen. That evening, I tied several flies with a tuft of green Antron on the end and skipped and danced them on the water’s surface, bouncing from riffle peak to riffle peak by holding my rod high and keeping the line short and off of the water. By lowering my rod once in a while, the fly drifted a few feet; then I lifted the rod again so the fly bounced from the crest of a riffle and into the air, before landing it again. The strikes were fast and furious. I didn’t hook every trout, but it was a fun way to fish.

No matter if it’s spring, summer, or fall, caddisflies are a common food source for trout and a good bet when it isn’t obvious what the trout are eating.

Jason Randall is a frequent contributor to American Angler. He can be reached at [email protected]