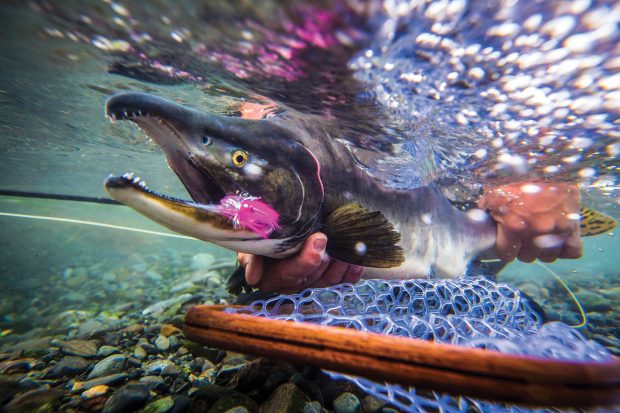 Though pink salmon are the smallest of the Pacific Coast salmon that return to rivers to spawn, they’re one of the most plentiful, and biologists estimate 6.5 million will return in 2015. (photo by Jay Beyer)
Destinations 0

When, where, and how to target schools of pink salmon just a stone’s throw from the Emerald City.

t’s an odd-numbered year. That means millions of pink salmon—two-year old torpedoes—will swim into Washington and southern British Columbia waters where fly fishers eagerly await. Some are locals who hit the beach or river before or after work. Others come from afar, spending vacation days and airline miles to intercept the run. Both groups know these salmon are a terrific saltwater fly-rod fish.

Truth be told, I didn’t know much about the fish 20 years ago. All I remember reading was that the fish ate pink flies. Armed with scant information, a few flies whipped up the night before, and my 5-weight trout rod, I headed to a local river in search of adventure. A congregation of parked cars revealed a likely spot. They say newbies can learn plenty by observing others, especially if “the others” are catching fish. But that’s simply not part of my DNA. I waded thigh-deep and started flinging a pink squid fly towards the far bank, though I will admit, I sneaked a peek to see what the other anglers were using.

I heard a splash behind me and spun around to see a sneaky salmon skittering upstream, spraying water as it powered through a riffle. It’s metallic blue-black back glistening in the afternoon sun. Despite what my sister claims, mama didn’t raise a complete dummy. I immediately realized the wisdom of fishing where the fish were swimming. A silver-bright pink salmon hit on my first cast and we both were hooked; she on that pink squid, me on fly fishing for pinkies.

Puget Sound pink salmon are amazing fly-rod fish because they only return to spawn during odd-numbered years, they’re able to pack on a lot of weight during 18 months at sea, and they’re easy to target from shore or small boats. (photo by Loren Elliot)

A few days later I launched myself inside a float tube into Puget Sound from a county park that includes the word “point” in its name. It’s a bit unsettling to be in a tube on the Sound when the wind and current are running quickly along in one direction and large marine mammals are searching for food between you and the shore. But I’m willing to be a bit unsettled when catching fish—so long as I remember to quickly release each fish before it attracted one of those hungry mammals. Thankfully, I’ve since graduated to a pontoon boat.

Most salmon share a similar coloration in the saltwater. However, you can distinguish pinks by their large, oval spots dotted along the entire tail. The fish have small, weak teeth, small scales and bright silver sides and belly. As they blossom into spawning dress, identification gets easier. Their metallic blue-black back turns olive or brown, a bright red lateral stripe appears and the males develop a Quasimodo-type hump, earning them their “humpback” nickname.

Pinks are the smallest of the five Pacific salmon that return to Pacific Coast rivers to spawn, undoubtedly due to the fact that they only live for two years. Research data says pink males average five pounds with females running a bit smaller, though my own anecdotal evidence and experience indicate the average fish is getting larger and there are plenty of seven- and eight-pound fish showing up in catches. In fact, the Washington state freshwater pink salmon record has been set and broken in recent runs. The current record is a huge male weighing 15.4 pounds. To reach such proportions is astounding when you consider the fish weighed a few grams only 18 months earlier.

Pinks finish spawning by mid-October. The following spring the fry pop from the gravel and jet downstream, traveling at night to avoid predation by land, water, and air-based predators, and often reach saltwater in a few hours. The fry form schools and roam the estuaries for up to six months before migrating to the Gulf of Alaska. After a year at sea, they head back south where commercial and sport fishermen wait.

Once they reach the river mouths, they hold in tidal-affected areas, giving their bodies time to reverse the smoltification process and adapt to freshwater. These fish are a bit cranky and tough to catch, but resume the bite after adapting to the new environment.

Pinks, much like chum salmon, use the lower river, sometimes even spawning in tidal areas, but there are exceptions. On some river systems like the Skagit, pinks swim over 100 miles upstream, scooting through fast water at warp speed, then rest at the head or tail of pools without orienting themselves toward specific structure. When the fish are ready to spawn, males and females pair up in tailouts. Wading anglers need sharp eyes to avoid trampling the redds.

An oddity of the species is Washington and southern British Columbia pinks return on odd-numbered years, except for a small run on the Snohomish River. However, fish making their way through Alaskan and northern Canadian waters are more evenly distributed between genetically different odd- and even-year fish. Equally as strange, Washington released 85 million juvenile pinks during even-numbered years over 22-years, hoping to establish an even-year run. The experiment was a total failure.

Early estimates by British Columbia fisheries biologists have 20 million pinks swimming up the Fraser in 2015, so fly fishers should hit the Fraser and its Chilliwack River offshoot from late August through September.

In Washington, pink salmon, eager to complete their two-year life cycle, filter through the Strait of Juan de Fuca beginning in mid-July though fish continue to arrive through September. The bulk of the run will congregate in Puget Sound and approach the river mouths by late August. If you need to travel, pencil in your vacation plans for Labor Day. The Washington Department of Fish & Wildlife (WDFW) estimates the 2015 run at 6.5 million fish, roughly the same as the 2013 run. (continued on page 2)