One Meter of Mongolia

Mongolia is  a pristine fly fishing landscape and is home to the world’s largest species of trout, the bestial taimen.

THE MONGOLIAN HIGHLANDS APPEAR BEFORE US UNDER DEEP BLUE SKIES, a rough-hewn setting from a long-gone era. Fall has clad the hillside in flaming colors, from thickets of sagebrush to the vast grass plains and sporadic blotches of larch trees. As the river carries us downstream at a sedate pace, silence so completely saturates the air that even our thoughts have difficulty finding any resonance.

If it wasn’t for being hundreds of kilometers away from any semblance of civilization, we might as well be drifting an archetypical prairie river in Montana. But below us in the cold, whirling water lurks an ancient predator that would spook even the most self-assured Montana trout fisherman. With its shifty eyes, powerful jaws, and massive flanks—and especially its propensity for launching cold-blooded attacks on any prey item within sight—this fish defies all comparisons with other trout.

Hucho taimen, or taimen as it’s commonly called, is the world’s largest living trout species, the uncrowned king of this remote wilderness. Ever since I read my first article about this indomitable predator, I have dreamed about catching one on a fly rod, specifically a one-meter (approximately 40 inches) or longer specimen. Now, almost 25 years later, my friend Klaus and I find ourselves in the middle of this alluring childhood dream. We have been easing down the river in a drift boat that our guide from Mongolia River Outfitters has placed at perfect casting range every time we’ve passed a promising holding spot.

He has concentrated his efforts on seams between the shallows and the deeper pockets, along pronounced eddies, undercut banks, deeper pools, and especially backwaters below steep cliffs— and the results have been phenomenal. Countless times, our voluminous streamers have been brutally attacked. And even though we still haven’t landed one of the monsters, the dream is alive and well.

Not less than a week ago, one of the guiding bureau’s clients landed a massive 51-inch taimen on a big mouse pattern. Several fish up to 60 inches have been landed over the course of the past five years, and each of our trip’s four enthusiastic guides have seen fish in the vicinity of 67 inches while guiding on the river. However, to catch one of these relatively slow-growing and old fish is not a simple matter. First of all, they have bony mouths full of teeth and a strong grip that makes it quite difficult to set the hook. Secondly, they have a nerve-racking ability to tear apart leaders on boulders and sunken trees. As a result, it is more common to briefly be in contact with these river monsters than to actually land them.

“Incredibly enough, the fish takes the fly at close range another three times without me being able to hook it.”

Sunlight pours down the barren hillsides of the valley and displaces the morning coolness. We’re approaching a big bend, where the water accelerates and greedily licks a steep cliff. At the entrance of the bend, an agitated fish collides with my streamer, and after a violent display of ill-tempered head-shaking and heady escape attempts, one of the river’s magnificent fish looms alongside the gunnel and glides into the net. It is not a taimen, but instead one of the relatively rare Amur trout, a fish with blushing gills, olive green flanks, scarlet fin-slashes, and irregular and haloed dots the size of ink stains. It’s one of the most beautiful, distinct, and exciting trout species I have ever caught. This particular specimen is about average size for the river—a good 20 inches, but they grow to about 35 inches, fight with intense determination, and have a ravenous appetite.

Several species of fish live in the rivers that Mongolia River Outfitters administer. In addition to taimen, Amur pike, flathead asp, lenok, and Amur trout (above) inhabit these rivers—and they are all fierce predators

Together with grayling and the everpresent, closely related lenok trout, the population of Amur trout conjures up a dream scenario for dry fly and nymph fishermen. And in the more sedate channels, forks, and tributaries where the pace of the river slows down, flathead asp and Amur pike will explosively attack streamers without remorse. All in all, the amount of exciting fish species in this river is overwhelming—or more precisely, acutely stressful. 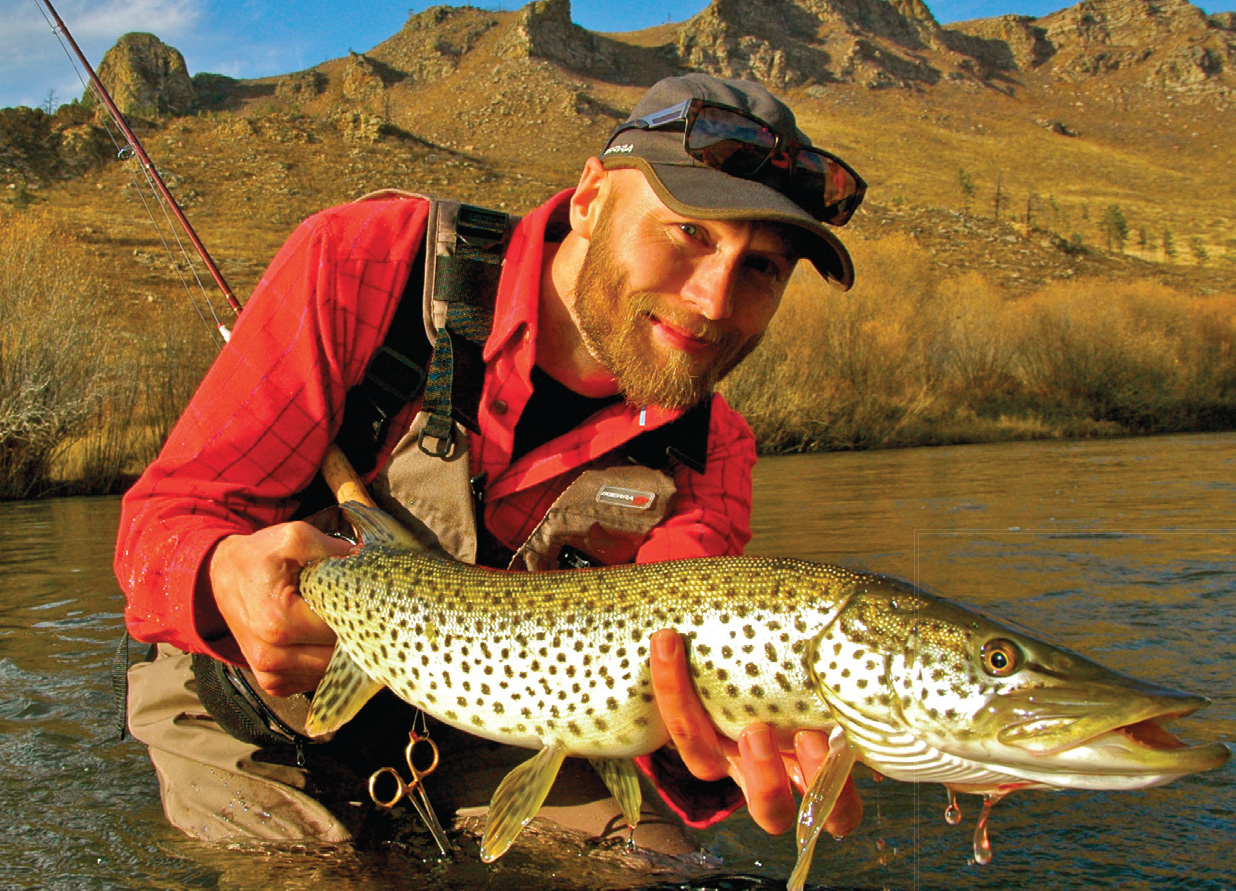 The unhooked Amur trout now glides back into the water, makes a couple of insulted slaps with the tail, and heads for the rocky river bottom. At that very moment, I hear a massive splash downstream, as if someone has just dropped a moped into the water. When I look up, I see a pod of grayling skipping the surface while the water behind them bulges and whirls. A big taimen has obviously moved into the shallows to hunt, and it doesn’t take us long to come within casting range.

I manage a quick crosscurrent cast a bit downstream, approximately where the fish revealed itself, and can now clearly see a depth curve along a gravel bank as I retrieve my fly with abrupt and resolute strokes.

Klaus, who is in the front of the boat, has also just made a cast, and he suddenly freezes as a short burst of startled, guttural sound escapes his lips. I’m certain the fish is following his fly but, in that same instant, I feel a violent tug on my line. For a couple of intense seconds, my rod bends and bows in submission while the fish rolls vehemently on the surface. Then, suddenly, the line becomes slack.

Klaus has seen it all from the bow of the boat. The taimen has followed my fly patiently, all the way to the boat, and launched its definitive attack right below Klaus’s feet. “It had to be at least 110 centimeters (43 inches),” he mutters, but there is no time for regrets. With assurance that there is still a good chance the fish will strike again, the guide commands us loudly and clearly, “Cast again!”

Incredibly enough, the fish takes the fly at close range another three times without me being able to hook it, and afterwards things go silent—awfully silent. We let the spot rest for a good half an hour and return with new flies that we retrieve with alternating pulls and galloping hearts, but nothing happens.

After the two previous days of fumbling fishing, where we have primarily succeeded in fine-tuning our fishing technique and finding a handful of useful flies, we have only just gotten started for real. We still have four full days of drift boat fishing ahead of us, and anything can happen.