After a tremendous response to the debut of the X reel series in 2015, Nautilus owner Kristen Mustad took a year off from designing anything new, and returned with the company’s newest design, the GTX ($1,300) for 2018. Voted best new saltwater reel at IFTD, Mustad says he engineered the 8.7 ounce GTX to compete with any terminal tackle reel and a backing capacity that can hold up to 500 yards of 60-pound test braid. The drag itself contains a pressure spring sandwiched between two aluminum discs that rotate in unison over an oversized carbon disc. The end result is up to 25 pounds of even pressure and the same low inertia startup Nautilus reels are known for.

Like the company’s approach to its new Zephrus Ultralite rod, Hardy engineered a new large arbor reel to be one of the lightest and strongest it has ever produced. The Ultralite MTX ($430 to $500) reel is machined, has a 340 degree adjustable drag knob and carbon fiber drag system, and what Hardy says is its first reel to feature a hybrid carbon fiber and alloy to create a strong, albeit lightweight, frame. 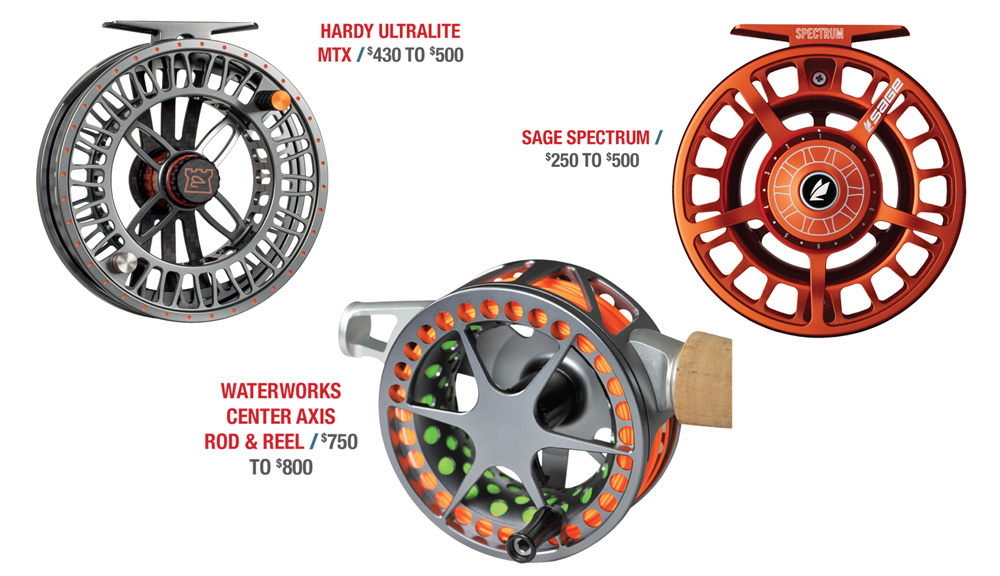 Another classic fly fishing name that’s recently made a strong resurgence in the market is Colorado’s very own Ross Reels. After winning the IFTD best freshwater reel award in 2016, they continued to refine and reinvent their products for 2018. The Evolution R Salt ($595 to $795) is a lightweight, large arbor reel with a stainless steel and polymer drag system that produces up to 30 pounds of drag, and a bell-shaped arbor to help line self level on retrieve. The key feature, however, is the large, starshaped drag knob that easy for big, fish-slimed or wet hands to adjust. Another new Ross addition, the Evolution LTX ($385) follows in the footsteps of its predecessor, the LT. It includes all the features of the LT (like its famous sound), but incorporates the technology Ross’s R series.

One of the most unique approaches to reel (and rod) design at the 2017 IFTD show was the Center Axis ($750 to $800) rod and reel package from venerated reel maker Waterworks Lamson. Since the mass of a fly reel doesn’t sit on the same casting axis as a fly rod, casters can feel some awkward, disjointed sensations during a cast. To combat these pendulum-type forces, the company integrated its new Center Axis reel ($350 to $375) into a rod butt so it aligns more with the rod blank, handle, your hand, and your arm during a cast. Lamson is upfront and says their idea is not a groundbreaking, fresh notion, but they have been able to put more thought, time, and research into the idea than any other manufacturer before, and combined with the company’s success and advancements in reel design, they were positioned to dial in on the concept better than previous attempts. That said, this past year the company also continued to focus on its bread-and-butter and also unveiled the Cobalt ($570 to $800). Available in just 6-, 8-, 10-, and 12-weight models, Lamson is marketing it as their “big game powerhouse.”

In 2016, Abel unveiled their SDS (sealed drag saltwater) reel at IFTD and it won the award for best new saltwater reel. This year, Abel adapted some of the same machining, components, and technology of the SDS to a freshwater version of the same reel called the SDF ($420 to $800). This reel has a large arbor, large drag adjustment knob, and a drag range that’s larger than most reels so you can make minor adjustments to protect fine tippets. Abel’s new design impressed so many the company was able to win again in 2017, this time in the best new freshwater reel category.

Rather than create one reel model in various sizes, Sage has created a reel “family” of three different models, each tailored for a specific application. The Spectrum ($250 to $300) is the baseline reel in sizes 3/4, 5/6, 7/8, and 9/10. The Spectrum LT ($350 to $400) has a slightly more rigid construction and is intended for light two-handed applications. The Spectrum Max ($450 to $500) is the big-game workhorse of the group. All models have Sage’s popular one revolution drag adjustment knob and its SCS drag system.

Many anglers love the personal touch—colors, engravings, anodized artwork—reel makers can apply to spools and housings these days, but often balk at the price tag. As an inexpensive (but still brute tough) alternative, Redington created the I.D ($90 to $100). This die-cast design looks similar to Redington’s popular Behemoth reel, and is available in sizes 3/4, 5/6, and 7/9. But the eye-catcher is the flat surface around the drag knob where you can adhere any number of pre-designed stickers ($5 each), though Redington is working on a setup where customers can design and order their own. If you need a creative gift or something memorable to commemorate a birthday, wedding, or graduation, this could be it.