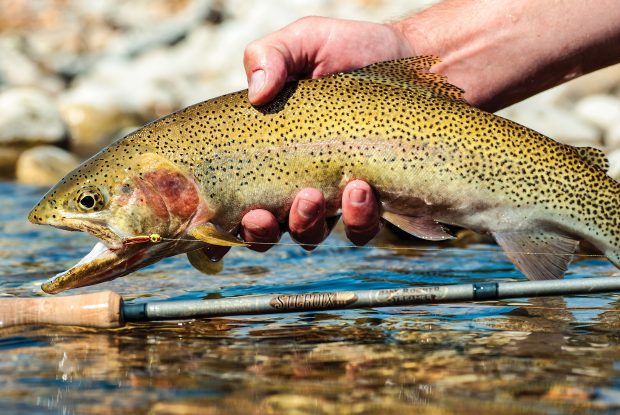 Patterns and tactics to imitate juvenile fish that trout and salmon find irresistible.

BIG FISH EAT LITTLE FISH. It’s one of the mantras of all fishing endeavors, not just fly angling. And nowhere are there more big fish and more little fish than in an Alaskan salmon river in mid-June. The big fish are the winter-hungry rainbows and char that move upriver out of the lakes to gorge on the first windfall of the season. The little fish are the millions of tiny salmon fry that are emerging from their natal gravel beds and fleeing downstream to the safety of the lakes, where they will spend the first year of their life cycle.

The trout often stack up like cordwood in shallow runs, where a dozen fish over 20-inches long may be visible at a time. A pod of migrating fry can provoke slashing strikes, with the action moving downstream at the pace of the current. Seams along cut banks and eddies attract lines of feeding fish. Even when the river seems dead, there’s the occasional swirl where some lone fry has met its end.

But just because a fish is aggressive, doesn’t mean it’s easy to catch. Even unpressured rainbows in Alaska can be as selective to fly size, color, and drift as any Henry’s Fork rainbow. The difference, of course, is that a trout eating bugs may feed a hundred times a day. When the prey is an inch long and pure meat, a dozen meals is sufficient. 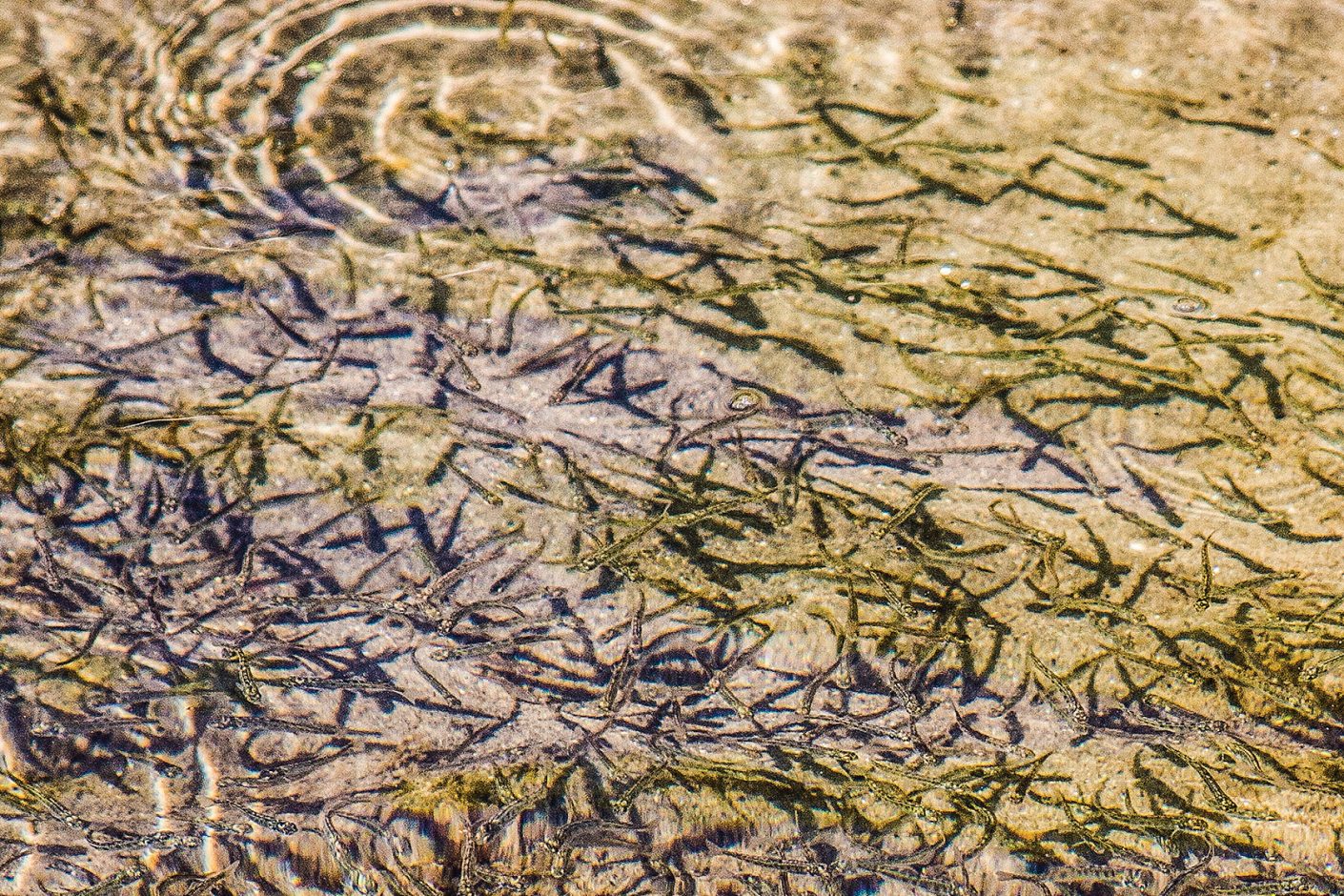 Generally speaking, fry rear along river banks and in shallow eddies (below) where natural elements protect them from predators. Eventually, when the fry migrate, some are haphazardly sucked into stronger currents where fish like big rainbows (right) are waiting for an easy meal. (photo by Will Rice)

Every summer for the past 30 years, my fishing buddies and I have visited Bristol Bay and spent a week or two camping near rivers that host huge runs of sockeye salmon. Over that time, we developed a few patterns and techniques that increase the odds of success and learned those same flies work in any place that hosts naturally spawning fish.

Any discussion of trout fishing in Alaska begins with the salmon, and in Bristol Bay, the primary salmon is sockeye. The trout make a living off eggs deposited in the late summer and early fall and fatten up for winter on the flesh of dead salmon, but are eager for the first feast of fry and smolt in the following spring.

But first the eggs must go through a series of stages. The first of which is called the alevin, and it’s nothing more than a newly hatched fry that hasn’t quite absorbed its egg sac. Unfortunately, while fly manufacturers create beautiful and creative alevin patterns, they are, at least where we fish, essentially worthless. Alevins typically don’t wiggle their way out of the safety of the gravel until they absorb the egg sac, a process that occurs well before the opening of trout season in Bristol Bay. This is not to say that alevin patterns won’t catch fish. Alaskan trout are suckers for a red spot—witness the eggsucking leech. But they are not the fly to use if you are trying to match the fry hatch. 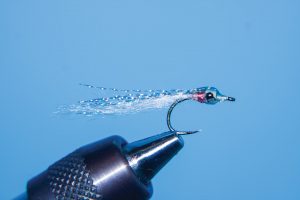 Sockeyes spawn in the headwater streams, but the fry drop downstream to overwinter in the lakes, migrating out to sea the following spring as 3- to 4-inch long smolts. In fact, anglers often confuse the two stages, with the fry frequently referred to as smolts. The general rule is that if you are upstream of a lake, use fry patterns. When fishing large rivers downstream of a lake, you’ll do better with larger smolt flies.

Truth be told, sockeye fry are in the river for only a brief period of time. Depending on water temperature, they appear in large numbers around the opening of Alaska’s trout season on June 8 and are typically gone by the first of July. Warm weather will have them out of the river by mid-June, but at the other end of the spectrum, late cold spells may delay the migration until late June.

Obviously, not everyone has the opportunity to fish Bristol Bay at the start of the season when fry litter the rivers. But the same flies and techniques implemented in Bristol Bay will work in a number of other situations. Pink salmon fry, for example, migrate quickly down into the salt chuck, and coastal cutthroats gorge on them. On the other hand, king and silver salmon fry rear in the rivers in which they are born and are available to trout throughout the summer—all anglers need to do is increase fly size as the season progresses.

But salmon streams are not the only rivers where fry flies can be deadly. Any river with a natural spawning population of trout, whitefish, or other species has its own version of fry, usually rearing along the banks and in the shallow eddies. Even those educated Henry’s Fork rainbows I mentioned earlier will pass up a size 20 baetis for the piscatorial equivalent of a porterhouse. Because fry flies swim just below the surface, they are particularly useful in rivers with lots of overhanging moss and weeds, where fishing streamers is virtually impossible. One caveat on using fry flies for trout that are primarily insect eaters is you might experience more short strikes than you’re used to. To remedy that situation, I find I have better success using long shanked hooks.

(photo by Will Rice)

Patterns are important, but the real key to success is technique. I like to think my fly reaches trout with the same motion and orientation as a natural. Unfortunately, nobody really knows what that motion and orientation is. It’s essentially impossible to observe fry as they migrate down river. However, based on observations of smolt, the most likely method is that fry face upstream, allowing for maximum maneuverability, and drop down with the current, though fry probably do this episodically—it makes more sense if they hold in the current while looking for predators, and then drift down. This is pure speculation on my part, but it’s consistent with the most successful methods of fishing a fry pattern. Most fry seem to migrate in the upper reaches of the water column, although fishing bright patterns deep can be effective, particularly with char and in turbulent pools.