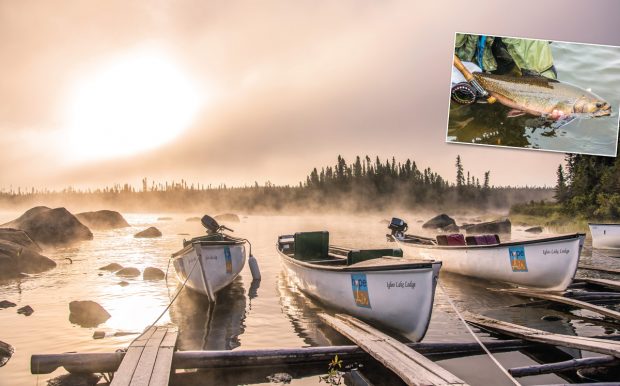 Frost on the Rods

Brook trout nirvana in the heart of the Big Land.

It looks pretty chilly this morning. I pour a cup of strong black coffee before walking to the window to look outside. The massive iron woodstove is stoked and roaring in the corner of the room. The pine trim around the window feels warm to my touch, belying the cold, crisp northern air that swirls about on the other side of the iced glass.

It’s barely September, early for frost, but I’m standing in a fishing lodge in Labrador, too far north for balmy autumn winds. There’s a mist on the lake, the morning air being cooler than the summer-warmed water. A light frosting coats the nearby spruce and fir. A photographer’s dream awaits to blossom with the rising sun.

I drink my coffee next to the stove and fiddle with my camera gear. I cannot resist an opportunity to photograph the Big Land in its autumn morning glory. That’s how east coast Canadians refer to Labrador, the Big Land, and for good reason. It is a vast wilderness. I’m here on a mission to catch big spawning colored brook trout in full splendor, but hey, it’s never just about fishing.

While the heat of summer may still blanket the southern portion of North America, frosty nights come early in Labrador, but wood stoves in rustic cabins, and thoughts of big, spawning brook trout help anglers “suffer” through the long, dark nights.

My fellow fly anglers are gathering around the stove in anticipation of breakfast. Two guys are discussing leech patterns; another is knotting up a new leader. The smell of frying bacon is tantalizing, mingled with java and blazing black spruce. It takes dedication to angling journalism, and to my planned portrayal of the Zen Labrador experience, to get myself outside and recording my surroundings in full digital splendor. I pause to take a shot of my 6-weight Loop hanging by wooden pegs just outside the lodge. It’s covered in frost, a most beautiful thing. I’m pumped for autumn brookies, and Labrador is the place to be.

After bacon and eggs, my angling partner, Andy Gould, and our guide, Colin Preston, don waders and boots while continuing to discuss tactics. Andy is from Nova Scotia and Colin is a fellow native of Newfoundland and Labradorian. We decide to head downriver to Archie’s Pool. This beautiful and fishy-looking piece of deep moving water is about a mile below the main outflow of Igloo Lake. The lodge is situated strategically where the river exits the lake, and Archie’s is a 45-minute walk along the river’s riparian zone. There are plenty of other pools, but Archie’s is rumored to host good numbers of gigantic trout. I think the pool’s location, where the river flows into a footballfield-sized pond, or “steady,” known locally as a place where one current meets another, and into a “big steady,” is prime trout holding territory.

We arrive and survey the scene. The sun is above the spruce and the crisp air is warming. The morning mist barely clings to the pond, and dissipates with haste, though the frost lingers on the Labrador moss and lichen, highlighting our every boot print.

I love fishing run-ins. This is just dandy. I make my selection of fur and feather and approach the deep pool with stealth and caution. I’ve waited too long for a go at world-class September brookies, and now the game is on.

My black rabbit-strip leech imitation swings just perfectly on a classic downand-across presentation. Colin has wisely instructed that these big trout don’t like wasting energy. Winter is nigh, and food will be scarce for many cold northern months. So I try to swim my fly in a lifelike fashion, right in front of the fish’s noses. That means starting short and lengthening my cast at half-foot increments. Colin also reasons that the trout are lying close to the bottom, so I mend appropriately, even though I’m using a sinking polyleader.

My first trout attacks my fly just before it reaches the dangle. It’s not an abrupt tug, but rather a powerful, slow pull that lights up my senses. I allow a foot of line to slip between finger and cork before lifting my rod to make steely contact with my quarry.

This is no mountain-stream-variety brookie. In milliseconds, line viciously peels off my reel, surely melting any remnants of morning frost. My 6-weight rod bows in deep respect to what is undoubtedly a trophy trout. Even small Labrador brookies are trophies to the outside world, especially after gorging themselves all summer.

The to-and-fro battle goes on for minutes. It’s hard to track time with any precision when adrenaline is coursing wildly through your veins. But flesh and blood must eventually tire, and I guide my deep-bellied trout to Colin’s waiting net. My heavens, what a fish—these Labrador trout are so deep and wide across the back. I can’t believe what my eyes insist upon. It is a female, so I have yet to catch and see the most spectacular colors of a male, but this is a gift from the angling gods to be appreciated with utmost joy and thankfulness.

The island of Newfoundland alone is 42,813 square miles, bigger than all of Canada’s other Maritime Provinces combined. It is separated from Labrador by the 10-milewide Strait of Belle Isle. The population of Newfoundland and Labrador is around 500,000 people, most living on the island near the capital city of St. John’s. There is much wilderness and tons of fine brook trout fishing on the island as well, although you’ll not likely find something that parallels the monster brookies of Labrador.

From Goose Bay, Jim Burton’s Beaver airplane will ferry you to brook trout fishing extraordinaire. Jim is the owner of Igloo Lake Lodge and has more hours on a Beaver than he cares to recite, though in his early years, he flew water bombers and an air ambulance. To say he is an accomplished bush pilot would be an understatement.

If Labrador is trout nirvana, Igloo Lake is the brookie epicenter of this spectacular land. It’s 72 miles southeast of Goose Bay in the inner region of the Eagle River watershed—an area protected by law from development and inaccessible by road. Jim has the only outfitting operation on the lake, so visitors should not expect other company. It is world class, the best of the best.

On the island of Newfoundland, where I live, a two-pound brook trout is quite nice, three pounds is special, and a four-pound trout is a rare trophy. Living here all my life, I have caught only one four-pound trout.