Following its success with a proprietary sealed-drag design in freshwater-size reels, Abel announced it applied the same engineering to saltwater-size models it calls the SDS ($895). Each unit is entirely machined from aluminum, easy to change from right to left retrieve, and in keeping with Abel’s ability to personalize gear, anglers have their choice of custom colors and graphics. It impressed enough IFTD attendees to win the award for best new saltwater fly reel. There are three sizes available, starting with a 7/8-weight model through an 11/12-weight.

Not to be outdone by its sister company (Mayfly Outdoors owns Abel, Ross Reels, and Charlton Reels), Ross Reels put its best foot forward from a design, weight, and functionality standpoint with the Colorado LT ($285 to $295). Fully machined from aluminum, this reel is notable for its drag—Ross Reels revisited its iconic click pawl system. It’s light and modern, but still has that old-school feel and sound. Those who had the chance to hold and handle the reel at IFTD (and even dropped it to test its durability) thought so highly of it, this model received the award for best new freshwater fly reel. Available in either matte black or aluminum colors, in 0- to 5-weight sizes.

IFTD attendees also saw something new from a familiar face—Bauer fly reels, which was recently acquired by Winston, unveiled its new SST ($355 to $525). For this reel, Bauer incorporated a signature handle-side, star-shaped drag knob. Inside, each unit has the company’s fully sealed, zero-backlash carbon fiber drag system. Available in 3- through 9-weight sizes, SST are offered in anodized aluminum or jet black, though there are eight different drag knob color options. 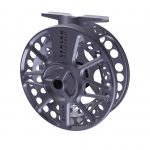 Another familiar face, Idaho-based reel company Lamson says it’s continuing to leverage the engineering and technology that shape its Force series toward the Litespeed’s conventional structure. This year, the manufacturer did it again with the Litespeed Micra-5 ($350), though the Micra portion of the name actually refers to a new finish Lamson says is 20 times more impervious to corrosion than standard anodization. The housing is made from bar-stock aluminum; it has a large, narrow spool for faster line retrieve and a full-diameter drag knob with zero snag points.

Sage continues to make big strides when it comes to reel engineering. For 2017, the 6200 ($440 to $500) is the company’s flagship reel. The best feature is the carbon drag and single-revolution drag knob—there are 40 markings on the outside of the knob, and you can go from loose-and-free to a dead stop in one turn, or count the click marks to make minor adjustments, depending on what you’re fishing for. The 6200 is made from machined aluminum, available in three colors, and comes in five sizes from 5/6- to 11/12-weight.

In 2016, Redington took a huge share of the reel market with its affordable, and well-built, die-cast reel, the Behemoth. For 2017, the company once again set its sights on anglers wanting a quality reel at an affordable price and upgraded its Rise ($190 to $220) selection. Made from machined aluminum, each has a quick-release spool, oversize drag knob, a carbon fiber drag system (unsealed), and converts from left to right retrieve. The reels are available in three colors in 3/4- to 9/10-weight sizes, and come with a lifetime warranty (another attractive selling point).

To help anglers add an element of versatility to their day on the water, Hardy added another model to its Ultralite lineup. The Ultralite ASR ($300 to $400) has a removable and replaceable spool cassette to make quick line changes a snap—just swap in a new cassette with a different line, restring your rod, and get back on the water. You can label the cassettes themselves (two spools included, additional spools are $12 to $14 each) so you don’t get confused about which line is which, but the rest of the reel is made with the same Hardy attention to detail. Machined from aluminum, the reels are strong but light and include the same 340-degree, color-coded drag knob as other models in the series, and will be available in five sizes. The company also reworked its popular Fortuna model into a stronger, lighter saltwater reel it rebranded the Fortuna XDS ($800 to $950). The redesign also included a second look at the drag system, and the largest of the four sizes available can now crank down to 32 pounds, enough to fight big tarpon or offshore fish. 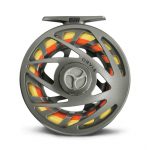 Finally, Orvis spent much of the last year focusing on the redesign of two of its popular reel models, the Mirage ($500 to $850) and what it calls a “new generation” of Battenkill Disc Reels ($150 to $200). The Mirage has a larger-than-average arbor for fast line retrieve, and a sealed stainless steel and carbon-fiber drag coupled with a patented mechanism for smooth startup and adjustments. Cut from aluminum, and available with either a pewter or black finish, it will come in five sizes from 3/5- to 11/13-weights. The new Battenkill is a mid-arbor reel that maintains the classic look of the original but contains a few modern refinements to the drag and finish, and is available in seven sizes, including two Spey models.