Three new patterns to imitate one of the most prevalent mayfly species in North America, and simple ways to present them.

In the Mountain West, the sunny days outnumber the gray ones, but when the clouds roll over the ridges and the drizzle starts, I head to a river because I know the fish are just about to go nuts on hatches of blue-winged olives (BWO).

But those cool, rainy days are few and far between at times. Most afternoons in Colorado, where I lived for many years, are more of a test against the SPF rating of my sunscreen. Those are times when it’s important to know those little blue-winged nymphs are just waiting for the perfect day to hatch. Even though they aren’t moving toward the surface, or emerging, they are crawling all over the place down below and almost constantly available to fish. It’s actually one of my preferred times to present blue-winged olive nymph patterns—slim, sleek flies with little more than thread and wire wrapped to imitate the natural’s thin, tapered form.

What’s great about blue-winged olives is they’re so prevalent, and most trout waters throughout the United States contain a good population of these insects. There are usually two to three broods each year, with hatches occurring at various times in the early spring through late fall, and even sporadically in the winter, especially on more temperate tailwater rivers. It’s nice to be on the water during a hatch, but anglers often aren’t afforded such perfect timing. That’s why underwater BWO patterns are something you should always be ready to fish.

Despite their diminutive size, are a trout favorite (left), especially in slow-water sections like sloughs. (photo by Baron Zahuranec)

With so many blue-winged olive nymphs crawling around among the rocks and vegetation, bugs are always at the risk of being swept along in the current. The next time you’re in a stream, pick up a few rocks from the water and look underneath. Depending on where you’re fishing, there might be a stonefly or two, some cased caddis, midge larvae, and more than likely blue-winged olive nymphs. Trout simply wait for those little morsels to lose their grip along the protection of the rocks. With a realistic imitation presented on a good, clean drift, you can hook up more often than not.

So when it comes to blue-winged olive patterns, having a variety of styles, each with a different little twist or flair, gives the fisherman the upper hand. Some things I like to do for my own blue-winged olive patterns are vary the emerging wing material and the coarseness of the thorax dubbing, and add black or mercury-colored beads to the head. I do this because I firmly believe being able to show fish different looks of the same mayfly can turn a slow day into one where you get trout to bite repeatedly.

On clear, sunny days, I like to use a pattern in dull shades that isn’t too flashy. I don’t want a fly that calls too much attention to itself compared to the naturals in the water. While bright flies get looks and turns from trout, it seems like the trout will commit more readily to a subdued, duller fly.

Trout are most comfortable in the absence of bright sunlight. Dark skies mask shadows and encourage fish to move around. When the clouds creep in or the sun dips low, I go for a fly with a little more flash—with the idea that the reflection might be appealing to fish.

Blue-winged olives are one of the most prevalent aquatic insects in most streams. (photo by Baron Zahuranec)

Keep in mind that trout want to expend as little energy as possible throughout the day, feeding or not. This preference is even more true for big trout. The larger the fish, the more it has to eat in order to maintain its size. A 22-inch trout would rather feed in the slower water, sometimes less than a foot deep, than fight the current farther out in the river. Unfortunately, I think a fair number of fishermen don’t give this water much attention, because the more alluring deep, dark water in the middle of the river looks to hold all the trout.

Sight-nymphing is especially rewarding because you aren’t casting to search for trout. By locating a trout first, every cast becomes much more likely to be successful. With an arsenal of little nymphs, emergers, and spinners, you’ll be able to take trout even if the weather isn’t encouraging a hatch. I believe you can catch a fish on any cast, but the odds increase if you can see exactly what you are casting to. If you need more encouragement than that, then personally, I find that fooling a 20-inch fish in 10 inches of water on the third cast lights me up much more than if I caught the same fish while watching an indicator wander downstream on the first cast.

Observation and patience are keys to active nymphing. Take your time when you get to the water, and survey the scene for surface action. Peer into the water and look for trout, discern what they’re doing (if they’re feeding), and pick a pattern that matches their feeding style. If you see only the flash of a white mouth, and the fish doesn’t move much, it’s probably taking nymphs right in front of its nose. If a fish is moving up in the water and swiping, it could be going after emergers struggling toward the surface. Vary the amount of weight on your line and the density of your nymph patterns according to what you’re seeing. 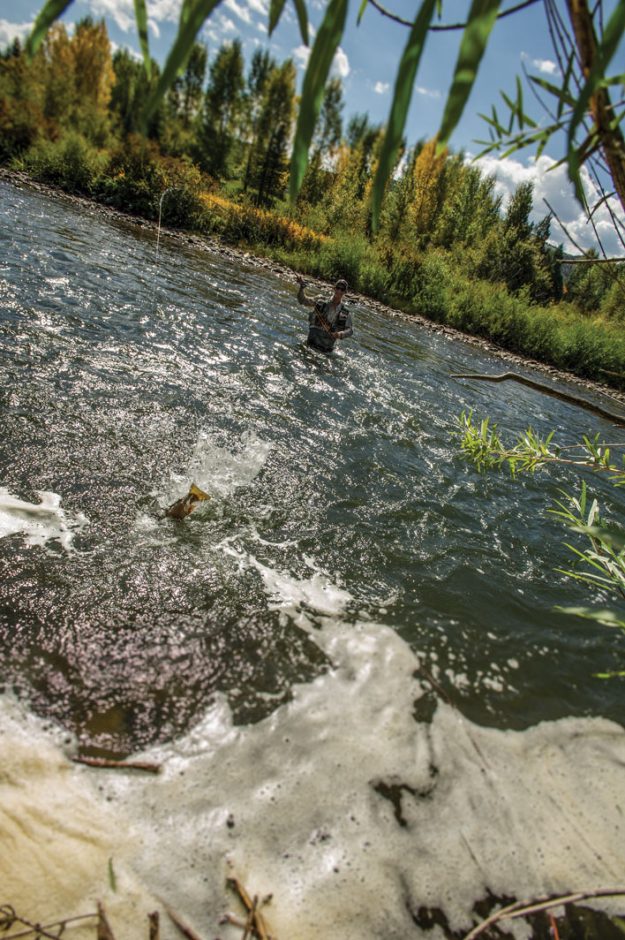 Keep in mind that trout want to expend as little energy as possible throughout the day, feeding or not. This preference is even more true for big trout. The larger the fish, the more it has to eat in order to maintain its size. A 22-inch trout would rather feed in the slower water, sometimes less than a foot deep, than fight the current farther out in the river. Unfortunately, I think a fair number of fishermen don’t give this water much attention, because the more alluring deep, dark water in the middle of the river looks to hold all the trout. (photo by Tim Romano)