Their newest film project, Big Land will take them into the heart of Labrador’s Taiga region for a DIY exploration of what may be one of the last truly untouched native brook trout habitats in the world.

There is a trend out there, of films that seem to generate interest by filming at “bucket-list” destinations. Did Tight Loops originally set out to create films that challenged the notion of a bucket-list adventure?
Chase: In some ways, yes. I think we set out to tell the types of stories we wanted to see, and for us that meant things we could relate to. We’re broke millennials, scraping by to pay our student loans and rent so the idea of traveling the globe fishing for exotic species just wasn’t realistic. Seeing other people do that kind of stuff isn’t all that interesting when you can’t put yourself in their shoes.
Aimee:We wanted to inspire other people like us to get out and make the most of what they had, because in our our experience, if you take a moment to admire your surroundings and be present, a 6 inch brookie smashing a dry fly on your local stream can be every bit as exciting as a 4-foot long Taimen in Mongolia.

What was it that led you to Labrador, and when will you be filming this new project?
C: I think Labrador has always been a forgone conclusion. So much of our focus as anglers and artists is on the fish themselves, and brook trout have fascinated me for the last twenty years. What many people might not realize is that brook trout were the united states very first sport fish, as well as being one of the first fish the colonists made contact with upon reaching the new world. It was also deeply sacred to the Native Americans. You’d be hard pressed to find a more quintessentially American fish, and yet we’ve decimated their populations and habitat throughout their native range. What little pockets remain intact are stunted and still very much in danger. Every contemporary fly fisherman has sat around at some point thinking to themselves “I wonder what things were like 200 years ago?”, well in Labrador you have the ability to live that first hand. We’ve always had a thing for big wilderness, and there’s perhaps nowhere else, especially in North America, that is as dark, mysterious, and wild as Labrador. It started with a fish, but now it’s transformed into a love affair with the empty expanse of the land. The incredible thing is that it’s also in our own back yard. Sure, its remote, but we can jump in our car and start driving north, and within a day or two be on the edge of the civilized world. That’s a big motivating factor for this adventure; it’s right there for the taking, you just have to buck up and go for it.

Labrador has a really short season, so our timeframe is limited. We’ll be departing mid way through August, which that far north is essentially the beginning of fall. We’re expecting cold nights and brightly colored and aggressive fish making their way to their prespawn haunts. 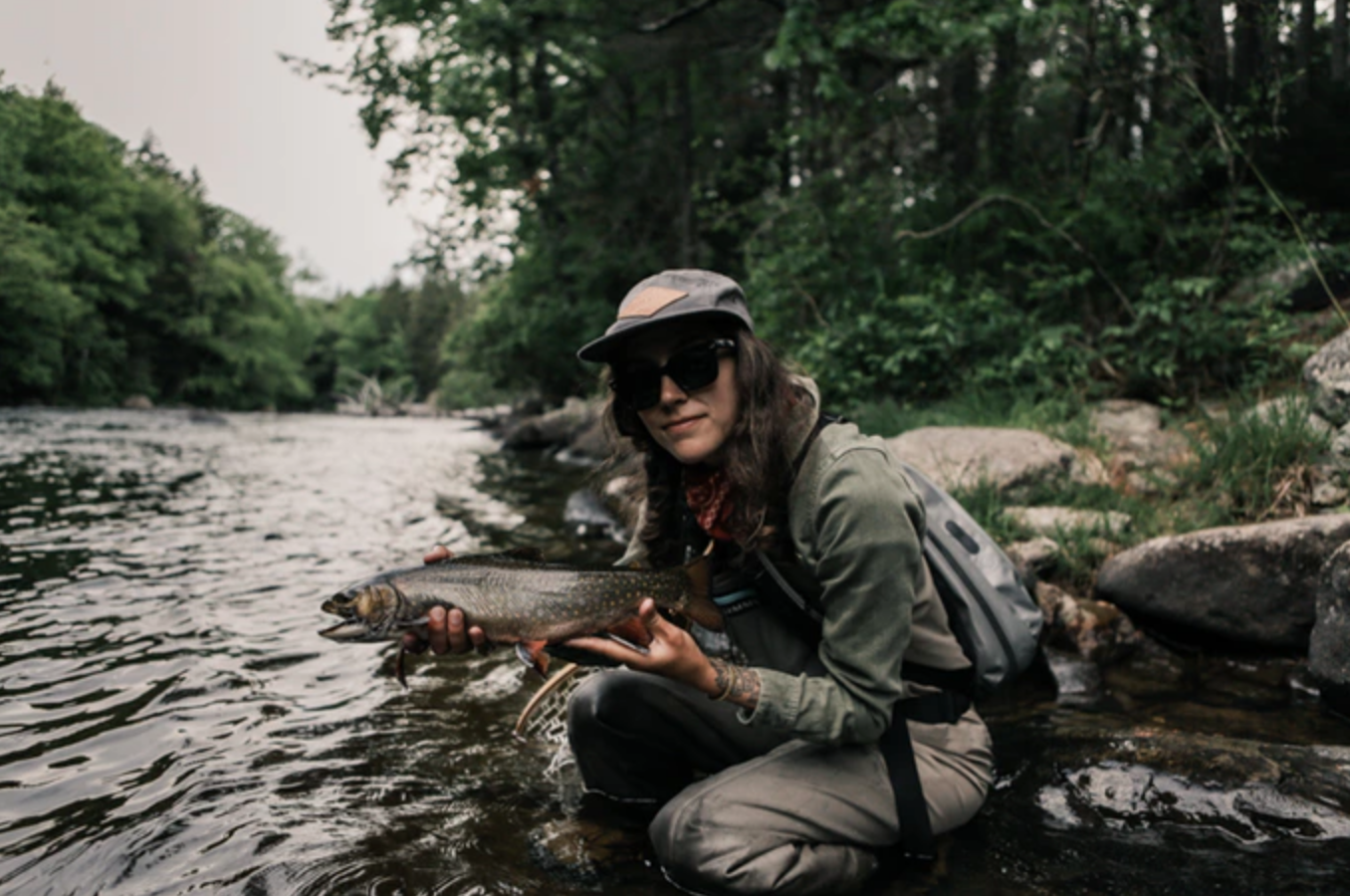 (photos by Aimee and Chase Bartee)

How remote is the region, and how difficult do you guys anticipate the journey to the headwaters to be? What do you hope to find the most on this trip?
A: (Laughs) It’s going to be pretty tough.
C:There’s a reason there aren’t any other films like this one out there already. We essentially have to drive our crew of 4, all our gear and 2 canoes on a 15 hour car ride until the road ends in Sept Iles, QC, then we jam everything on a dawn till dusk train ride until the tracks end in the small mining town of Shefferville, QC. From there we’ll jump in a float plane and be flown another 130 miles into total wilderness where we can actually start our expedition. The next 14 days will be entirely man powered as we explore the area by canoe. When our time is up we’ll be picked back up by float plane again and repeat the steps in reverse to return home.
A: I guess we’re not totally sure what we hope to find, that’s sort of part of the adventure. In our experience you always go into a trip like this full of expectations, but in the end you could never anticipate how strange and wonderful it’ll end up being. We feel a strong pull towards the place, and we find that those kinds of feelings are usually worth listening to.

You guys are currently running a Kickstarter for Big Land. How much goes into filming something like this, and how can people get involved?
C: An unbelievable amount of work goes into producing the type of content our viewers have become accustomed to seeing. The tricky thing about this film in particular is that the logistics of a wilderness expedition are already crazy enough. Its a full time job just planning the trip, and when you throw the film production on top of it things really start getting crazy. The toughest part is that we are jumping into the culture of canoe expeditioning from scratch. So, that means we’ve had to acquire gear that most paddlers would have amassed over decades of trips, and this stuff is expensive. When your gear could very literally mean the difference between life and death, because remember we will be completely isolated, with rescue potentially days away (in bad weather), then you have to invest in premium reliable stuff. The other issue is that we had to completely overhaul our filmmaking kit to optimize it for the constraints of extended camping. We have an arsenal of cameras, all of which need to be light enough and small enough to carry with us for weeks, as well as be able to be powered and recharged with solar energy (another thing we didn’t have going into this). All in all that has cost us every penny we’ve earned and saved over the last several years, plus a handful of maxed out credit cards. Then came the hardest part, overcoming the strict regulations Labrador has in place. As non residents we are required to engage with outfitters and bring a local guide, a somewhat silly requirement considering we are going somewhere no guide has ever been. Luckily we were able to find someone who was as excited about the project as we were, but it didn’t change the costs of doing business in the north. Our flights and outfitting fees will total $14k all said and done, hence our Kickstarter campaign.

A: We could figure out a way to fund one or the other, the trip or the film, but not both. That’s one of the incredible things about crowd-funding though, is that it allows fans of our work to get directly involved in what we’re making, and vote with their dollars about what they’d like to see more of. It’s essentially the same way a Hollywood blockbuster gets made; consumer ticket and merch sales pay for the money spent by studios and producers, in our case we just don’t have the studios money up front, so we cut out the middle man and go directly to our fans. Getting to interact with the fly fishing community and help bring creative projects like Big Land to life as a team has been one of the most rewarding experiences we could have ever asked for, and we can’t wait to make everyone proud who’s put their faith in our vision and supported our work.

C: The coolest thing about Kickstarter as a platform is that it required creators to offer “rewards” in exchanged for monetary pledged from “backers”. That means that depending on how much money someone wants to kick in towards the film they’ll receive something in return. We’ve got a ton of really awesome stuff up for grabs, including some of the best fly fishing art around from Ryan Keene, Tyler Hackett of Wandering Blue Lines, and myself. We’ve got some incredible original’s still for sale at an insanely discounted price so fish art lovers should definitely check that out. We’ve also got a ton fly fishing and paddling gear and swag up there so make sure to scroll through all the tiers. If folks are interested in the project but can’t afford to back it (which we completely understand) the next best thing they can do to help is share the campaign on social media or in person. Tell your friends and family about it, chances are if you like what we are doing they will to, and you never know who might be in a position to help. We love hearing from people as well, so don’t hesitate to reach out and talk to us about the project or anything else you may have on your mind! Hands down the most rewarding thing about making these films is all the incredible interactions we get to have with people. Film and fishing are both great unifiers, and we can’t wait to grow the family a litter larger with Big Land!

Kickstarter is an all or nothing platform, which means unless we hit our final goal we won’t receive a penny of what’s been pledged so far, so for anyone who’s thinking about supporting the film don’t hesitate! Every little bit really does count!”